It may now be commonplace for hotels to boast of their art; it’s rather rarer for a stellar collection to open a place to stay. Château La Coste, an estate a few miles north of Aix-en-Provence and an astonishing repository of contemporary sculpture and architecture in the South of France, this summer formally opens a hotel surrounded by 600 acres of woodland, organic vineyards, olive groves and lavender fields. It is an “art farm” of sorts, a domaine devoted to what the French call l’art de vivre, a place of rare enchantment.

There are some parallels with the renowned Benesse Art Site on the island of Naoshima in Japan. Indeed, it features works by many of the same Asian artists: the Japanese photographer Hiroshi Sugimoto, for example. One of his seascapes hung above my bed here, and he will be the subject of the first exhibition in the estate’s new photography gallery, designed by Renzo Piano. Lee Ufan is another presence. His House of Air, at the top of a slope planted with grenache vines, seems at first to have been there forever. Look again, though, and the trickery and trompe l’oeil gradually reveal themselves. 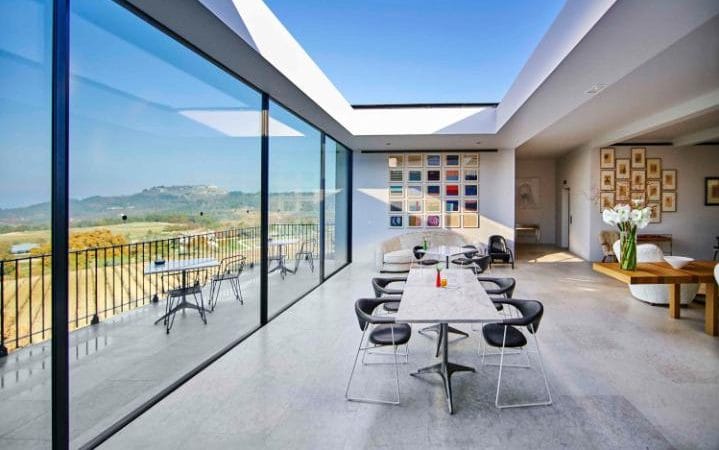 But perhaps most striking are Tadao Ando’s contributions – from the gate you pass through on arrival to the multifaceted Origami benches dotting the estate to the Centre d’Art, a bookshop and café set inside a long, low lantern-like structure that seems to float above a pool, in which stands a kinetic sculpture by Alexander Calder and a Louise Bourgeois spider. 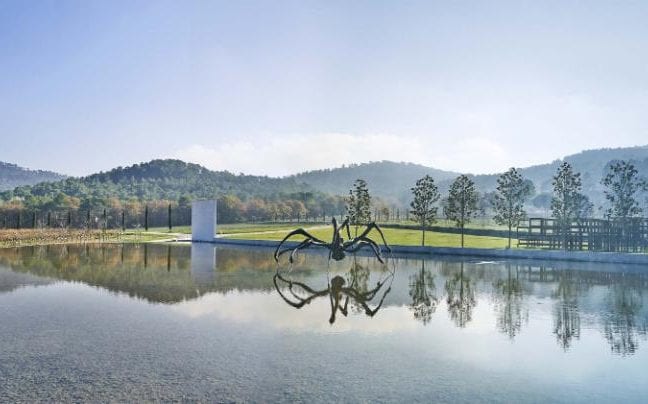 Follow the undulating wooded trails, where the air is heady with pine and rosemary, and there are installations by Tracey Emin, Liam Gillick, Andy Goldsworthy, Richard Serra and Paul Matisse (grandson of Henri). There’s also Ai Weiwei’s path, Ruyi, inspired by the form of a Buddhist ceremonial sceptre that links two roads, one known to have been built by the Romans. 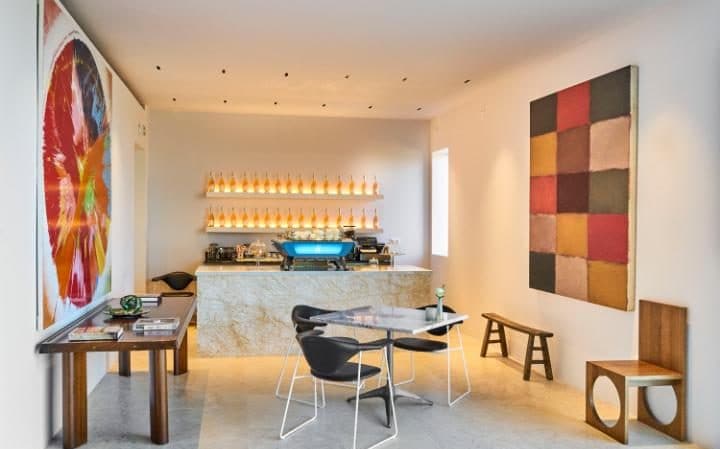 Château La Coste dates back to 1682 and has at its heart a bastide or fortified farmhouse and a hamlet of ancient buildings, among them an 18th-century winery, now a gallery space. The whole place belongs to the Irish property developer and collector Patrick McKillen, who would seem to have most of the world’s most sought-after architects on speed dial. Frank Gehry designed the music pavilion; Richard Rogers is working on a gallery dedicated to drawing, and there’s an amphitheatre by the late Oscar Niemeyer planned for among the vermentino vines.

The estate could draw a tide of visitors but McKillen is aware that art parks are rarely self-supporting – and he has been cleverly diversifying. There’s a state-of-the-art winery – designed by Jean Nouvel – that now produces a dozen delicious biodynamic wines, to be tasted here or in the café or in the three restaurants on the property. The kitchens are overseen by executive chef Gérald Passedat, who has three Michelin stars for his Le Petit Nice restaurant in Marseilles. Acclaimed Argentinian chef Francis Mallmann – the man who cooks steak on an open fire like no other – will take over at a new restaurant, opening soon, his first in Europe.

Finally, there is the hotel, Villa La Coste, an obvious next step for McKillen, who has stakes in London’s Connaught, Claridge’s and the Berkeley. Set high on a hill, the hotel building is a mild structure of honey-coloured stone by local architect Tangram. There are 28 large rooms ranged along a calade, a typically Provençal cobbled alley reminiscent of the ancient Roman pavements that have been excavated here, shaded by bamboo and perfumed with jasmine. Each is entered via an enclosed courtyard dominated by an olive tree, which makes it feel like a discrete unit, though some can be paired. Inside, the cool, understated look is an essay in myriad shades of white so as not to distract from the staggering views of Mont Ventoux, the Luberon massif and, on a clear day, the Alps. The result is a triumph. 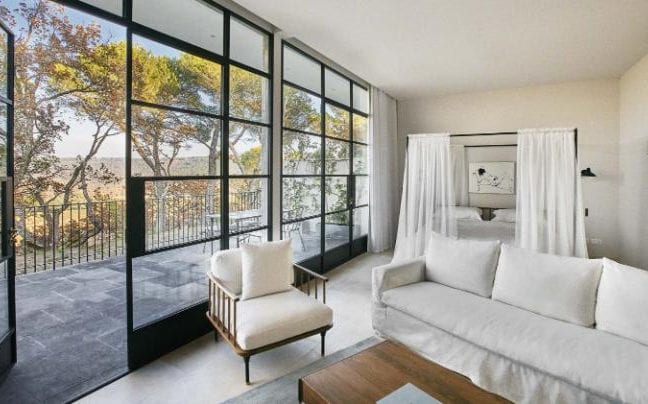 The furniture, all bespoke, has been designed by District Eight and conjures a Mid-century Modern vibe. And to reinforce the sense that this is a private home, there are abundant books on the artists represented on the estate, not least a 10-volume catalogue of the works of the architect and designer Jean Prouvé, whose aesthetic has clearly been an influence here and two of whose experimental 1940s prefab houses stand in the Potager, the formal market garden with work by Carsten Höller, John Rocha and an ornate 19th-century tea pavilion that McKillen had shipped from Vietnam. 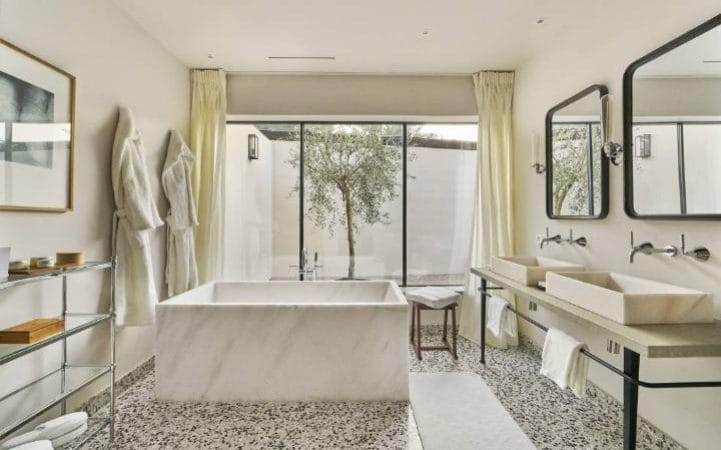