The new seat design was first unveiled by Qatar Airways Group Chief Executive, His Excellency Mr. Akbar Al Baker moments before the airline’s annual press conference at a spectacular reveal ceremony, on the opening day of the ITB Berlin exhibition, at the Qatar Airways stand. Attended by an audience of notable VIPs, including His Excellency Sheikh Saoud Bin Abdulrahman Al-Thani, Qatari Ambassador to the State of Qatar in Germany, with the Mayor of Berlin, Mr. Michael Müller, as special guest of honour, guests were captivated as a life-size cross-section of a Qatar Airways aircraft featuring the new QSuite was unveiled to rapturous applause. 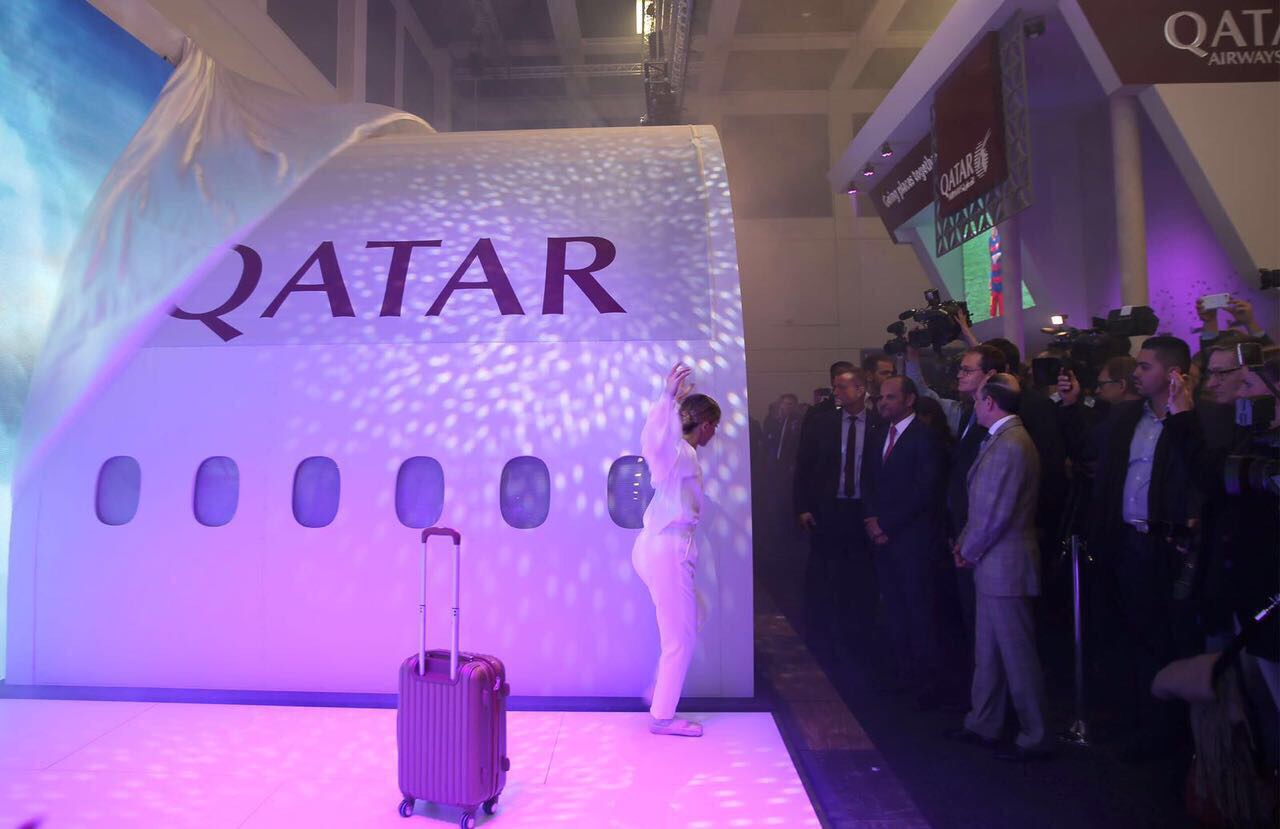 Launched at ITB Berlin, the world’s largest travel trade show, the unique and patented seat has been two years in the making. Its highly anticipated unveiling drew media from around the world and up until the reveal had kept industry experts guessing as to what features and developments it would include.

QSuite features the industry’s first-ever double bed available in Business Class, with privacy panels that stow away, allowing passengers in adjoining seats to create their own private room. Adjustable panels and movable TV monitors on the centre four seats allows colleagues, friends or families travelling together to transform their space into a private suite, allowing them to work, dine and socialise together. These new features provide the ultimate customisable travel experience that enables passengers to create an environment that suits their own unique needs.

Qatar Airways Group Chief Executive, His Excellency Mr. Akbar Al Baker, said: “Today I am proud to unveil the future of Premium travel with our new QSuite Business Class. Our unique and patented design is a world first in many ways and challenges industry norms by offering passengers more privacy, more choice and more personalisation. With these innovations, Qatar Airways has revolutionised the way we serve our Business Class travellers enabling our passengers to enjoy a First Class experience in Business Class. This is truly Business Class as never seen before and is entirely in keeping with our Premium product and service philosophy. On Qatar Airways, you choose when you dine, and the menu options are varied, with something for everyone. You choose when you rest, and when you want entertainment, we offer more choices than any other airline. It only makes sense to give you the choice to make your own cabin-within-a-cabin, creating double QSuites or quadrants.” 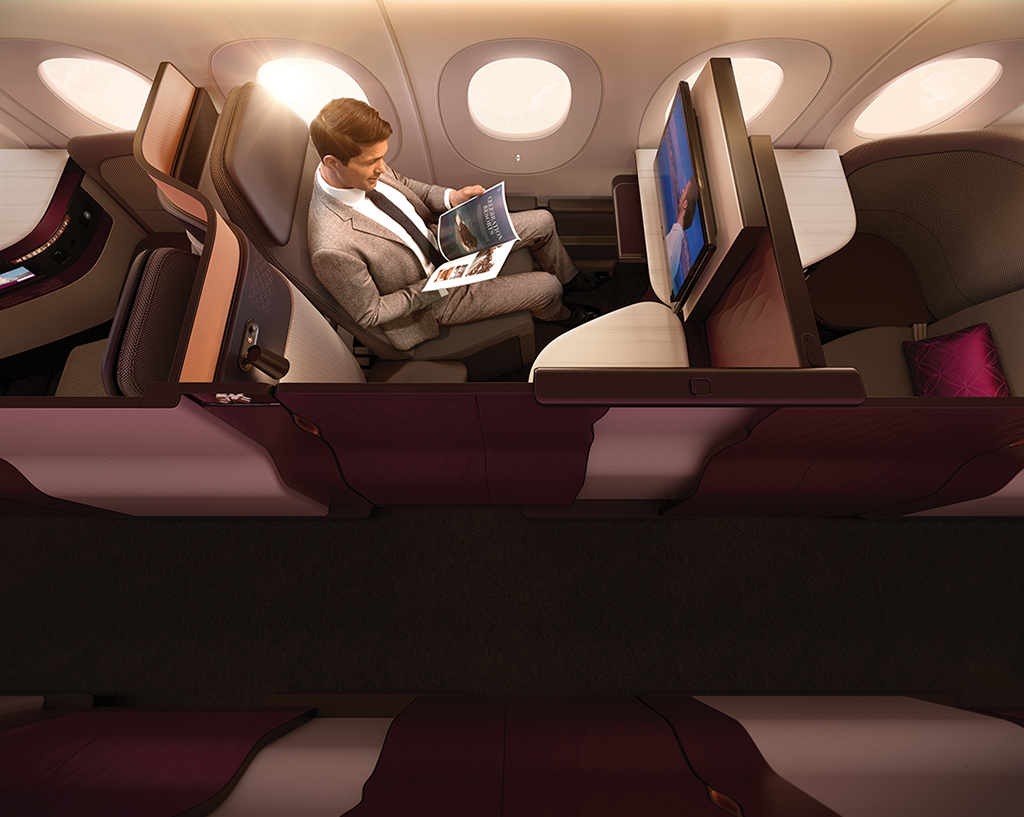 Each seat is crafted with thoughtful and luxurious details such as hand-stitched Italian leather and satin rose gold finishing, bringing an unprecedented level of luxury, privacy and style to Qatar Airways’ Business Class offering. To further complement the customisable on-board seating experience that passengers will now enjoy, Qatar Airways is also launching a new food and beverage concept, introducing a menu that offers a host of new dining choices.

In addition to the existing decadent ‘dine on demand’ service, the new Business Class menu will now offer a selection of snack ‘sharing dishes’ available throughout the flight, allowing travellers to turn dining at 35,000 feet into a social experience. A wake-up Express Breakfast will also be available for those who choose to sleep a little longer by making the most of the ‘Do Not Disturb’ option available on the door of their private QSuite.

Recognised by global travellers for delivering an extraordinary premium customer experience, and true to its title of ‘World’s Best Business Class’ as awarded by Skytrax in 2016, Qatar Airways will continue to delight passengers with an array of special touches and additional service enhancements, including elegant  new chinaware and cutlery, sumptuous soft furnishings and luxurious bed linens.

Qatar Airways also launched a completely new next-generation user interface of Oryx One, its award-winning inflight entertainment platform. Oryx One’s interface has been redesigned to make it even easier to surf content and choose from up to 3,000 entertainment options – the most of any airline. The next-generation user interface has evolved from the rapidly maturing online media sector, presenting movies, games and a special children’s menu in a format that is immediately familiar yet revolutionary for on-board passengers.

H.E. Mr. Al Baker also announced that starting this summer, Qatar Airways will begin offering best-in-class inflight connectivity, with more announcements to come in the weeks and months ahead.

This extensive and ground-breaking refresh comes as the airline celebrates its 20th year of operations marking two decades of growth, industry leadership and innovation. The new QSuite concept will be retrofitted on to the existing Qatar Airways fleet starting from June 2017, at an estimated rate of one aircraft a month. 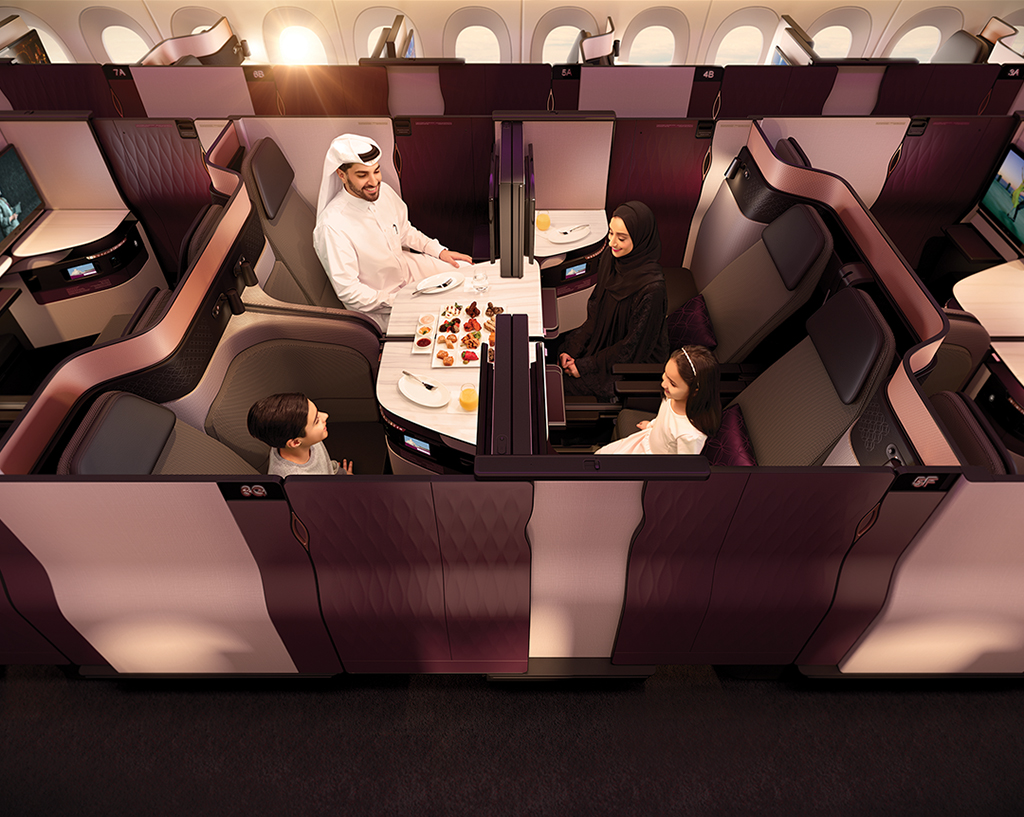 Known for introducing industry firsts, Qatar Airways is the national carrier of the State of Qatar, and is one of the fastest growing airlines operating one of the youngest fleets in the world. Qatar Airways has a modern fleet of 194 aircraft flying to more than 150 key business and leisure destinations across six continents.

Qatar Airways chose ITB as the platform for this highly anticipated product launch in support of the 2017 Qatar German Year of Culture, of which Qatar Airways is a proud sponsor. With the simple aim of bringing communities together, the year-long event celebrates the strong diplomatic relations between the State of Qatar and the German Republic. Germany’s Year of Culture with Qatar follows in the footsteps of Japan in 2012, the UK in 2013, Brazil in 2014, Turkey in 2015, and China last year, 2016.

Qatar has become a popular stop-over destination in recent years and with daily flights from Berlin and a double-daily offering from Munich and Frankfurt to Doha, more and more people within Germany are discovering the many delights that the country has to offer, from the traditional delights of the Souq Waqif market to the sparkling waters of the Arabian Gulf.